skip to main | skip to sidebar

This post refers to VecOS by Revival Studios. It is not a Vectrozoa release, and merely reflects my own opinion formed at Eurocon. VecOS is detailed at http://www.revival-studios.com/

VecOS is a very ambitious project to produce a form GUI Operating System front end and a variety of features that one might expect from a modern OS. The key point of VecOS is that all media and components are prepared on a PC, then they are assembled together into a single giant ROM which is booted on the Vectrex. The current limitation is that everything must fit within 32K, the advantage is that data format conversions, interpretations and pre-processing can all be done easily by the PC and presented in a efficient native Vectrex binary. Naturally since its a ROM the OS is effectively Read Only in terms of it's media, but it can hold many components (including traditional GCE binaries - remember most releases were only 4K)

The demonstration contained 4 distinct sections
An amazing combination of features, which also included support for Chip8 and other obscure languages. I even heard rumour that Martijn has reverse engineered some of my Vectrex Logo for VecOS! 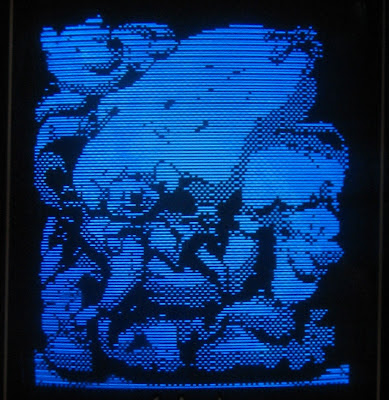 VecOS could be the best thing to hit Vectrex in a long time or it could be a curiosity; clearly it works hard to make the Vectrex do stuff it was never intended to do, and as a technical achievement it is already incredible. What happens will be down to us and how we receive this. Let's give it the reception, appreciation and support it needs to ensure it becomes a landmark in Vectrex development history! Great work Martijn!
Posted by Vectorzoa at 1:31 PM

>VecOS BASIC. This is the shocker, >not to be confused with Ken >Gibbons recent and superb Vectrex >BASIC which provides a full >embedded Vectrex BASIC editor and

I never heard about Ken Gibbons before! Do you have any web links for this?
Much appreciated...
Ian